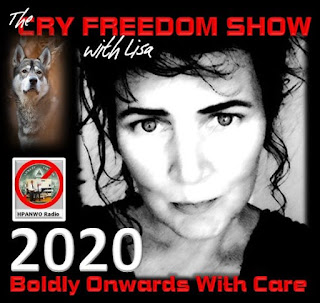 The twentieth short Cry Freedom programme by Lisa, see: https://www.spreaker.com/user/benemlynjones/cry-freedom-short-20.
In this short: "Far From the Maddening Crowd". Ha, this is what I wish as we try to ride the greatest storm of this century! As the manipulated media does its best to whip up a massive fear frenzy because three thousand people have apparently died due to their most recent "virus" outbreak... Did you know up to 650,000 can die each year due to flu? The "news" coverage has never been more contradicting and in your face; over the top. The actors never more false so it is to be hoped the "maddening crowd" can finally be reached. Also reminiscing about my early days of red pilling and attempts to show other ways to benefit our health which seem never more needed!
Music by Yokan: https://www.youtube.com/watch?v=9IbG4fxhY_U, Ronan Keating: https://www.youtube.com/watch?v=jqIQ2JvMAH8 and Bobby McFerrin: https://www.youtube.com/watch?v=d-diB65scQU.
See here for Cry Freedom Short 19: http://hpanwo-radio.blogspot.com/2020/02/cry-freedom-short-19.html.
Posted by Ben Emlyn-Jones at 20:27