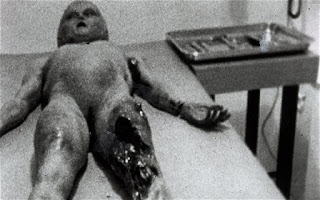 The podcast of Programme 149 is now available here to listen or download: (podcast removed)
And: https://archive.org/details/HPANWOShow2.

This week on the HPANWO Show: a special extended double-feature programme to mark the 20th anniversary of the "Alien Autopsy" film. Twenty years ago this month the world's media went into uproar over the launch of a mysterious silent black-and-white movie seeming to show the post-mortem of an extraterrestrial being. Twenty years later the Alien Autopsy film remains, depending on your opinion, one of the most significant or notorious events in the history of the UFOlogy.
Features an interview with Philip Mantle, a UFO investigator, author and journalist, see: http://www.ufotoday.net/. See here for Philip's previous appearance on the HPANWO Show: http://hpanwo-radio.blogspot.co.uk/2015/05/programme-136-podcast-roswell-slides.html.
Also a new guest, Colin Woolford, an exopolitical researcher and activist who has some radical ideas about the Alien Autopsy film, see: https://www.facebook.com/groups/1608597292719870/.
Also: All the latest news, details of upcoming events and space weather.
Posted by Ben Emlyn-Jones at 22:34