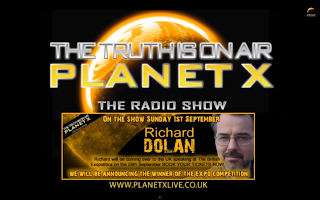 I have been featured again on Planet X Radio; this programme was first streamed on Sunday evening and the YouTube podcast is now available here: http://www.youtube.com/watch?v=rX-_syx8Q7E.

Planet X Radio used to be broadcast on the good old fashioned airwaves, Liverpool's City Talk FM, but it's still going strong today as an internet-only station; here's its official website on which this show will be streamed at intervals for a week: http://www.planetxlive.co.uk/. This week: an interview with Richard Dolan, an Oxford-educated historian of the UFO phenomenon and how it relates to the national security situation. He is also an author, a publisher, an activist and lecturer in the Disclosure movement and will be appearing at the forthcoming Fifth Annual Exopolitics Expo: http://www.exopoliticsgb.com/. See here for Richard's official site: http://richarddolanpress.com/.

Also, don't forget to tune in every Wednesday evening at 8 PM for my own radio show on Planet X, The Ben Emlyn-Jones Show; watch the Planet X site above and the HPANWO Radio blog. See here for my previous appearance on the Planet X Radio Show: http://hpanwo-radio.blogspot.co.uk/2013/08/ben-emlyn-jones-on-planet-x-radio-3.html.
Posted by Ben Emlyn-Jones at 12:33