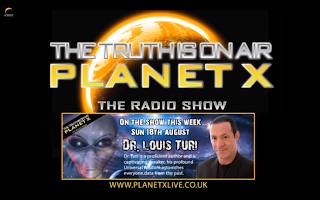 I have been featured again on Planet X Radio; this programme was first streamed on Sunday evening and the YouTube podcast is now available here: http://www.youtube.com/watch?v=ofoTmLBGkeo.

Planet X Radio used to be broadcast on the good old fashioned airwaves, Liverpool's City Talk FM, but it's still going strong today as an internet-only station; here's its official website on which this show will be streamed at intervals for a week: http://www.planetxlive.co.uk/. This week, Dr Louis Turi, an "astropsychologist". He's an author and speaker and a personal counsellor to many celebrities and has appeared in numerous television programmes worldwide. He speaks of the "Cosmic Face and Celestial Tools of the Creator". Like the great prophet, Nostradamus, Dr. Turi was born and raised in , and spent many years reviving the Seer"s rare method. See: http://www.drturi.com/.

Also, don't forget to tune in every Wednesday evening at 8 PM for my own radio show on Planet X, The Ben Emlyn-Jones Show; watch the Planet X site above and the HPANWO Radio blog.
See here for my previous appearance on the Planet X Radio Show: http://hpanwo-voice.blogspot.co.uk/2013/08/ben-emlyn-jones-on-planet-x-radio-2.html. From now on I will be posting notices about Planet X Radio on the HPANWO Radio blog.
Posted by Ben Emlyn-Jones at 12:52